NOTE: Prices below do not include deposit ($30 keg, $50 tap, $30 tub).
Please click here for keg specials, specs and rental policies.

This crisp and refreshing cider mixes the sweetness of the apples with a subtle dryness for a balanced cider taste. The fresh apple aroma and slightly sweet, ripe apple flavor make this cider hard to resist.

The Sculpin IPA is a testament to our humble beginnings as Home Brew Mart. Founded in 1992, the Mart continues to be a catalyst for the San Diego brewing scene, setting the trend for handcrafted ales. Inspired by our customers, employees and brewers, the Sculpin IPA is bright with aromas of apricot, peach, mango and lemon. Its lighter body also brings out the crispness of the hops. This delicious Ballast Point Ale took a Bronze Medal at the 2007 Great American Beer Festival in the Pro Am category. The Sculpin fish has poisonous spikes on its fins that can give a strong sting. Ironically, the meat from a Sculpin is considered some of the most tasty. Something that has a sting but tastes great, sounds like a Ballast Point India Pale Ale.

Brewed with oats for creaminess and spiced with the perfect combination of orange peel and coriander.
An unfiltered wheat ale spiced in the Belgian tradition for an uncommonly smooth taste.

Brooklyn East India Pale Ale, originally a summer seasonal, has been getting raves since becoming a year round offering in 1996. Garrett Oliver, a student of English brewing and beer history, uses English malts and hops to brew his EIPA in the classic, heavily-hopped style of the 19th century beers created for British soldiers serving in India.

Brooklyn Lager, the Brewery's flagship label, is New York's "hometown" beer, brewed to a pre-Prohibition recipe that dates back to the days when Brooklyn was the brewing capital of the East Coast. Brooklyn Lager has won numerous awards. Wrote Michael Jackson in the Simon & Schuster Pocket Guide to Beer: "The dry-hopped, fresh, flowery, firm, flavourful, Brooklyn Lager **-*** started well, in 1988, and has gained in character since."

Brooklyn Summer Ale is a modern rendition of the "Light Dinner Ales" brewed in England throughout the 1800's right up until the 1940's. They were also called "luncheon ales" or even "family ales", because they were refreshing and flavorful without being too heavy. We brew our Brooklyn Summer Ale from premium English barley malt, which gives this light-bodied golden beer a fresh bready flavor. German and American hops lend a light, crisp bitterness and a citrus/floral aroma resulting in a beer with a very sunny disposition.

Jai Alai India Pale Ale pays tribute to the original extreme sport. Jai Alai, a game native to the Basque region of Spain, is played on a court called a fronton. Jai Alai players attempt to catch a ball using a curved mitt, whilst the ball travels at speeds of up to 188 miles per hour! Proving they have a sense of humor the Spanish dub this game, with its ball traveling at race car speeds, """"the merry game."""" Tampa was once home to a busy Jai Alai fronton but sadly all that remains of Jai Alai in the Tampa Bay area is this India Pale Ale that we brew in tribute to the merry game. The India Pale Ale style of beer has its roots in the strong ales sent from England to thirsty British troops in India during the 18th century. To survive the journey the beers needed more alcohol and more hops (which act as a natural preservative). This “big” brewing practice made India Pale Ale one of the first """"extreme beers"""" and a favorite among the Queens military men in India. Eventually it became a favorite style of the new crop of American brewers seeking more flavor and complexity than mass-market brewers were willing to offer.

An Imperial I.P.A. brewed to be savored from a snifter. A big beer with a great malt backbone that stands up to the extreme hopping rate. Tasting Notes: Brandied fruitcake, raisiney, citrusy.

A crisp, refreshing, light-bodied malt-flavored beer with a well-balanced finish. A Lager that drinks like a Pilsner. A liquid embodiment of living life to the fullest. A beverage made from pure spring water and the choicest hops. A beer with such good taste, it’s chosen you to drink it.

An all-day IPA naturally brewed with a complex array of malts, grains and hops. Balanced for optimal aromatic and a clean finish. The perfect reward for an honest day’s work and the ultimate companion to celebrate life’s simple pleasures.

A hop lover’s dream. This classic ale adds a fruity aroma, set off by a dry malt middle, to ensure that the long hop finish is one you’ll remember.

Our brewers wanted to make a beer that went down easy after a day out on the water. Big Wave Golden Ale is just the ticket. Big Wave is a lighter bodied golden ale with a tropical hop aroma and flavor – a smooth, easy drinking refreshing ale. The use of caramel malt contributes to the golden hue of this beer and our special blend of hops provides bright quenching finish. 10.3°

This is our unique version of an ancient style. A style as old as the ocean trade routes of the last centuries Great Ships. Not as old as the equator they had to cross twice enroute, nor as old as the 10,000 or so miles of Di-Hydrogen Oxide and Sodium upon which they sailed, but older than the Circulithium-4 Lentloid that binds the Lupulin Quartnate onto your taste buds. Weird. Think about it. Now stop. OK, go again, now stop. Think again, and stop. But we digress. Made with 43 different hops and 65 various malts, this redolent ale will likely float your boat, whatever planet you’re on.

In 2012, Summer Shandy won a Silver medal at the Great American Beer Festival® in the Fruit Wheat Beer category.

A sort of dry, crisp, fruity, refreshing, not-quite pale ale. #9 is really impossible to describe because there’s never been anything else quite like it

Named in honor of our founder Jeff’s bike trip through Belgium, Fat Tire Amber Ale marks a turning point in the young electrical engineer’s home brewing. Belgian beers use a far broader palette of ingredients (fruits, spices, esoteric yeast strains) than German or English styles. Jeff found the Belgian approach freeing. Upon his return, Jeff created Fat Tire and Abbey Belgian Ale, (assuming Abbey would be his big gun). He and his wife, Kim traveled around sampling their homebrews to the public. Fat Tire’s appeal quickly became evident. People liked everything about it. Except the name. Fat Tire won fans is in its sense of balance: toasty, biscuit-like malt flavors coasting in equilibrium with hoppy freshness.

Samuel Adams Cherry Wheat® follows the centuries old American tradition of brewing beer with native ingredients, in this case Michigan cherries as well as a touch of honey. The sweet fruitiness of the cherries is balanced against the crisp, cereal note from the malted wheat and the subtle citrus flavor from the Noble hops. The end result is a sweet, refreshing beer that is light on the palate but long on complexity.

Gold in color, crystal clear, with lots of effervescence. Its white head dissipated very slowly leaving plenty of lacing all over the glass. It's a very nice looking beer. Aroma of bready malt with spicy and earthy hops. Flavor mirrors the aroma with the addition of caramel malt.

Samuel Adams® Summer Ale is an American wheat ale. This summer seasonal uses malted wheat, lemon zest and Grains of Paradise, a rare pepper from Africa first used as a brewing spice in the 13th century, to create a crisp taste, spicy flavor and medium body. The ale fermentation imparts a background tropical fruit note reminiscent of mangos and peaches. All of these flavors come together to create a thirst quenching, clean finishing beer perfect for those warm summer days.

The original. The icon. Sapporo Premium Beer is a refreshing lager with a crisp, refined flavor and a clean finish. The perfect beer to pair with any meal and any occasion. Kampai!

Sierra Nevada Pale Ale, is a delightful interpretation of a classic style. It has a deep amber color and an exceptionally full-bodied, complex character. Generous quantities of premium Cascade hops give the Pale Ale its fragrant bouquet and spicy flavor.

Ah love is bitter and sweet, but which is more sweet, the bitterness of the sweetness, none has spoken it.
Sweet action is an idea; a concept. It is a simple representation of what makes beer great - the marriage of barley and hops in a harmonious balance of sweet and bitter! 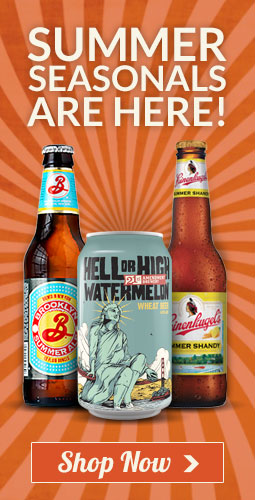